← Back to All Articles

Garden of the Week: A St Heliers Garden

An Auckland couple’s grand plan to give their elegant St Heliers home the garden it deserved involved months and months of not-so-grand hard labour. Trish and Chris mulled over the transformation of their garden for years, but the final stages of their ambitious makeover were carried out relatively speedily by the couple themselves – they planted 7000 roses, buxus and other plants during four months of dawn-to-dusk, hands-and-knees toil.

Their story begins years earlier, when they were invited to a birthday party at the neoclassical Georgian home. Chris, a property investor, recognised it was a rare gem – an impressive home on a big piece of land in Auckland’s eastern suburbs. When the chance came up to buy it, they didn’t hesitate.

The couple gave the home a top-to-toe internal makeover but left the garden much as it was, while their children Alexandra and James made the most of the pool and football-friendly lawn.

All the while, Chris and Trish pondered what to do with the garden, which in Chris’ words “just didn’t do justice to the house”. The home, built in 1936, had once sat proudly in over 3ha of grounds but in the late 60s part of the garden was carved up to make way for a subdivision. 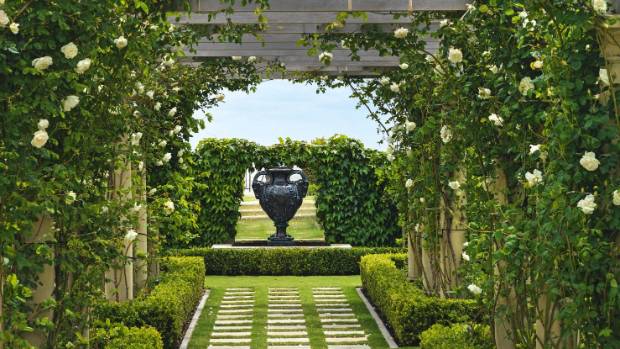 The view through the pergola ends with an urn and a mirror.

“We wanted to acquire more land and give the house back its presence,” says Chris. “It needed room to breathe. It sits on the knoll of the hill, and has a very grand and elegant look to it from the garden, but it had lost its street appeal.”

The purchase of the former British High Commissioner’s residence next door allowed them to realise their plan – joining the two properties meant the home could have its imposing front entrance restored.

While some couples with teens on the verge of leaving home might consider downsizing and spending their weekends lunching on Waiheke, Chris and Trish’s thoughts turned to realising their long-hatched garden plan. 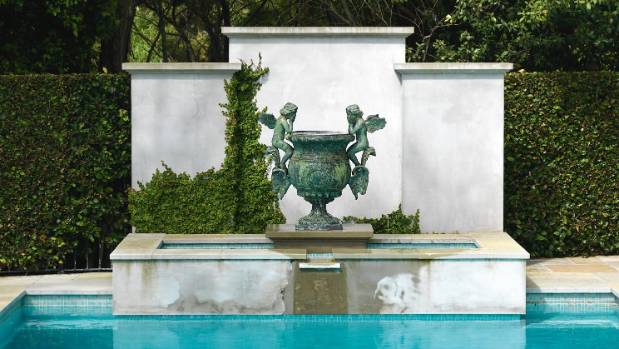 Trish says the ficus creeper will only be allowed to partially cover the masonry.

“We love the work of [Australian garden designer] Paul Bangay; we wanted that structured, layered look that is in keeping with the house,” says Trish.

Initially they considered reinstating the tennis court, but decided it wouldn’t get enough use. Landscape designer Robin Shafer worked with the couple on their plans over a long period, collaborating with heritage architecture specialist Stephen Cashmore, as he designed alterations to the High Commissioner’s residence, so it would complement the main house and could be used to accommodate guests.

For Robin, retaining the wide lawn was the making of the garden. “Scale-wise, it brings everything together. It’s the simplest part of the garden, but it’s the most important.” Robin was glad to hold on to other elements of the original garden, such as the graceful curved steps down to the reflection pool. 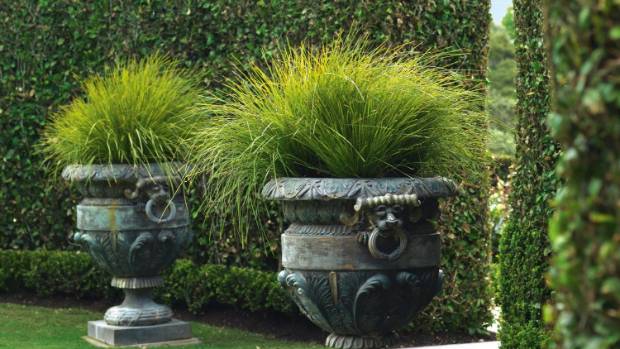 Two of the five bronze urns that were shipped from Rhode Island after being discovered on a trip to the US.

But before work could begin, massive retaining walls were needed – 8m at their highest level. For two months, workmen laboured and trucks trundled to and fro filling the section and creating a platform for the garden.

An old pergola with Bath stone pillars was slowly sinking into the ground, so that was rebuilt and a mirror sited at its end, creating a structure similar to those Chris and Trish had admired in the gardens at Ravello, Italy. Trish headed to the Parnell Rose Gardens to research the rose selection for the garden, choosing about 20 mostly white and cream varieties.

Then the planting began – Trish and Chris embarked on a kind of gardening boot camp that lasted from Labour weekend 2013 until February the following year. During nearly four months of relentless graft, the pair put in up to 400 plants a day, 7000 in total, often working from dawn till dusk in the weekends. 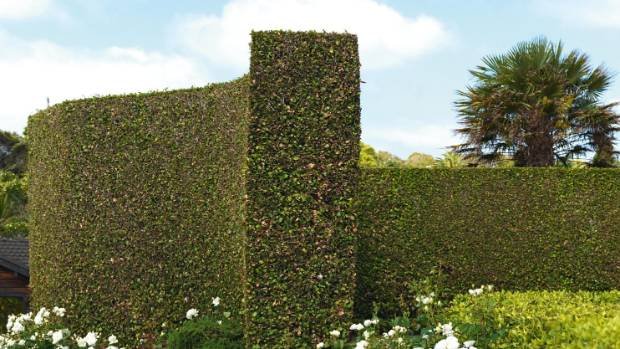 A professional hedge-trimmer comes every few months, but Chris trims frequently too.

It was very much a team effort. As contractors completed each section of the garden, a team of students, including the couple’s son James, barrowed in the topsoil. Chris credits the high quality fill they bought from NZ Landscape Supplies with the speed of the garden’s growth.

Trish sourced hundreds of plants at a time from many different growers. The contractors would leave on a Friday and come back on Monday to find the next section of the garden planted. The weekend planting sprees fitted well around their busy work schedules and “we enjoyed the  physical workout,” says Trish.

Although working together was satisfying, there were the odd fraught moments: “Agreeing on how to plant the diamond-patterned buxus was the most fractious,” recalls Chris, who left Trish to do it “her way” when they couldn’t agree. However, their work gets landscape designer Robin’s tick of approval. “They’re perfectionists,” she says. 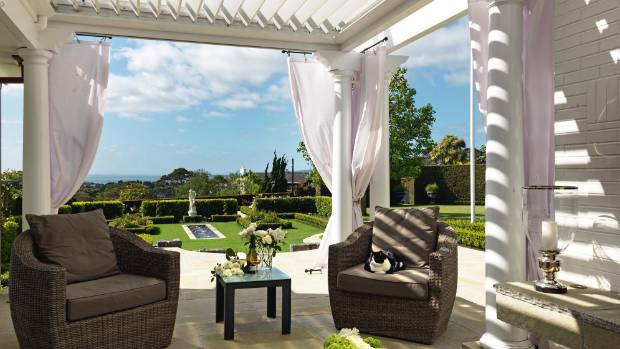 The guest house is often used for casual summer entertaining, as it has great indoor-outdoor flow and views to Rangitoto.

Working in the garden is also an escape from Chris’ pressured business life and a mobile phone that never stops ringing. Most Saturday mornings he’s out in his old clothes, mowing, trimming or mulching. “It’s therapeutic,” he says. But a weekly gardener and a regular visit from a professional hedge-trimmer keep the workload manageable.

While Trish and Chris put in a huge effort to plant the garden, “we’re determined not to be slaves to it,” says Trish. During summer weekends, they alternate gardening and boating and, when the garden is dormant in winter, they head off overseas.

“But there’s nothing more satisfying than working all day in the garden, then sitting down with a well deserved glass of wine to admire what we’ve created.” says Trish. “While we have the time and energy to maintain this place, we’ll continue to enjoy it and share it with friends and family for a few more years, before we do what everyone else does… and downsize.” 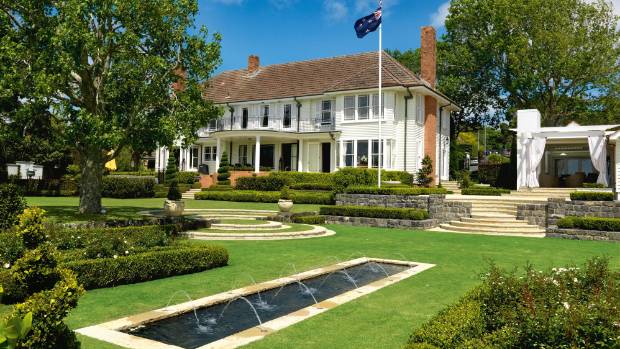 The steps were designed to echo the curved steps between the two lawns, which were part of the original garden but needed to be rebuilt.