← Back to All Articles

NZ House and Garden Garden of the Week

Sue was living nearby when she fell head over heels for the house with its graceful return verandah, two pohutukawa standing guard at its entrance, and proximity to the Waitemata Harbour. “I ran past it most days and hoped that one day it would be mine,” she says. After much cajoling, the Waymouths convinced the family who had lived there for 20 years that they would love it just as much.

The garden, which filled much of the 968sqm corner section, needed their immediate care. What had been a much-loved 70s garden had grown into a tired tangle, and the large pond was “a mozzie-fest”. Today, it is an abundant oasis of flowers, majestic trees, secret pathways and family lawns.

Sue’s previous garden was a tropical, low-maintenance affair, but she had always dreamed of a French cottage garden. “I knew that would be hard to achieve with the pohutukawa, and that I probably couldn’t have all the roses that I wanted,” she says.

So she set to work trawling the internet and absorbing books. Her greatest inspiration, particularly for layering plants, came from True Form, a book by Australian landscape designer Peter Fudge whose approach is to use simple lines to complement the architecture of a home and the lifestyle of the owners. 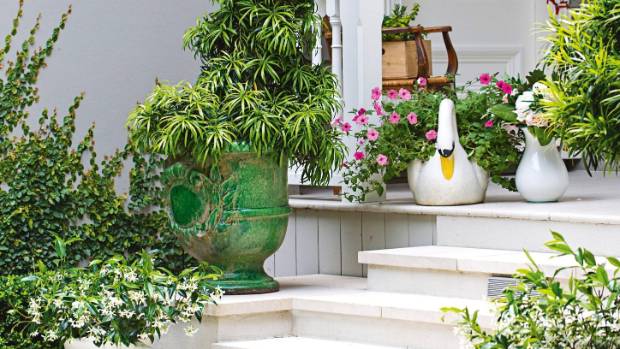 French pots on the steps are filled with star jasmine and brown pine (Podocarpus elatus) specimens.

After drawing up a heavily detailed brief of what she wanted, Sue turned to the professionals for guidance.

Her father-in-law, arborist Peter Waymouth, drove up from Dunedin with his trailer in tow and helped remove some trees and transplant others, including established palms. When landscape designer Robin Shafer came on the scene, she was impressed by Sue’s in-depth research. “Sue is so artistic, and she was so clear on what she wanted,” she says. “It’s more interesting when a client really knows what they want. You have to call on all your design skills to make sure it will work with the site and architecture to achieve that.”

Incorporating the well-established trees into the new garden design was a challenge that Robin relished. Finding plants that wouldn’t mind competing with the pohutukawa was a mission, but now clivias, loropetalum, bromeliads and a hedging of ‘Black Shadow’ holly thrive among the native trees’ labyrinth of roots. 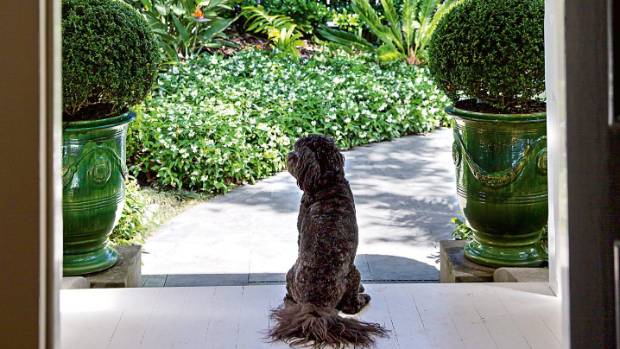 Tux stands watch at the front entrance, framed by buxus topiary and the villa’s fretwork.

Adding texture and colour was next. “The garden changes during the day because of the shadows, which adds real mystery,” Robin says. She also introduced an array of scented plants – gardenias, star jasmine, daphne, port wine magnolia and Mexican orange blossom – to enhance the garden’s romance.

But Robin’s toughest task was linking the different spaces so it felt like one garden. “Going from formal garden, to naturalistic space, to formal again: the beautiful house was the unifying element,” she says.

The Waymouths wanted more than just a charming garden.  Privacy was important, so a struggling hedge on the street-front was replaced with an elegant white fence in keeping with the house. There also needed to be ample spaces for their two children Harrison, 11, and Amber, 13, and cavoodle Tux to play. The front lawn transforms from a cricket pitch in summer to a soccer field in winter; there’s a swing in the pohutukawa, and a 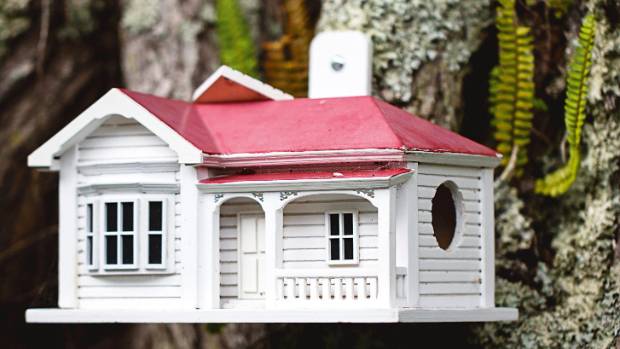 A bird house in the pohutukawa resembles the Waymouths’ home, built in 1910.

cricket ball for batting practice suspended from the persimmon. And when the family hosts Christmas every second year, there are plenty of opportunities for a mini-Olympics, including egg-and-spoon races, archery and treasure hunts. “We wanted it to be a special place for the kids. We even made secret paths, with stones from the original pond,” Sue says.

They managed to make space for a small orchard of lemons, plums, feijoas and blueberries, and a raised-bed vegetable garden, which was prolific last summer.

“I’ve loved the whole process of creating the garden, and now I can’t wait to create the next stage,” says Sue, who’s focused on revitalising the area around the swimming pool behind the house. 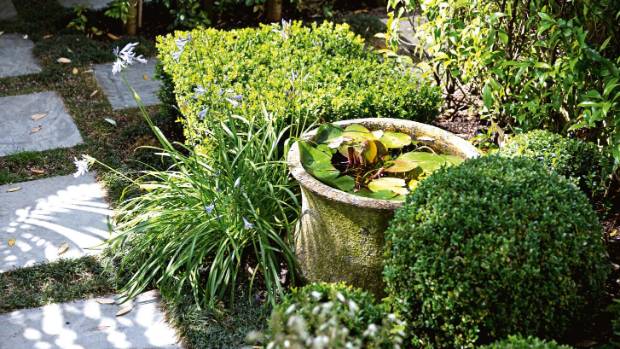 Water lilies transplanted from the original pond thrive in a pot, surrounded by Buxus ‘Green Gem’ and agapanthus.

A marketing consultant, Sue enjoys the perspective of the garden from her home office upstairs. “It’s a lovely place to live – sunny at the back, cool and shaded by the pohutukawa at the front. It feels like it’s always been a very loved home.”